How can we prevent suicide and self-harm in NC?

An overarching theme of the North Carolina Institute of Medicine’s 2021 annual meeting was that this time of COVID-19 recovery provides a unique opportunity to change things for the better, and that we don’t have to start from scratch. Healthy North Carolina 2030 offers a road map, based on real data, to help us meet our state’s health goals. The meeting allowed participants to attend breakout panels covering several of the Healthy North Carolina 2030 behavioral health indicators, including suicide rate.

As of the publication of HNC 2030 in January 2020, North Carolina’s suicide rate was 13.8 per 100,000 people, ranking North Carolina 16th among all U.S. states. Creators of the report set a 2030 target of 11.1 per 100,000 people. In an annual meeting breakout session called “The Resources to Keep Going: Improving Mental Health Access and Treatment to Prevent Suicide and Self-Harm,” panelists shared data on suicide deaths and suicide attempts in North Carolina and discussed risk factors for suicide. 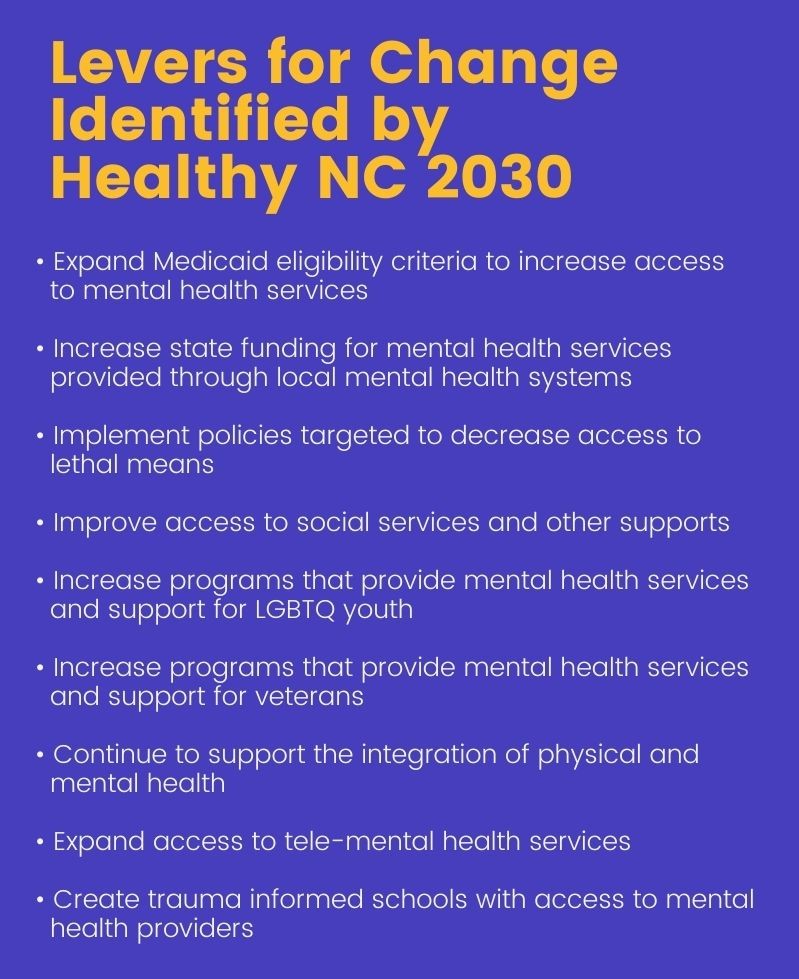 Mental health and access to treatment services are often overlooked in our health care system. One indicator of mental health outcomes – suicide –has been on the rise for years. Some special populations, such as veterans and LGBTQ youth, have seen elevated rates of suicide that require targeted prevention strategies.

In North Carolina, suicide accounted for 1,463 deaths in 2018, and 1,348 deaths in 2019. This corresponds with a national trend of rising suicide rates during the last decade. The impact of suicide is felt on both the personal and community level. Family and friends of the deceased bear both emotional and financial burdens. The state also shoulders a financial burden, losing an average of $1.1 million in “lifetime medical and work loss cost” in 2017.

Suicide is inextricably linked to mental health care and well-being. Studies show that many persons who die of suicide either had diagnosed mental illnesses or experienced high-stress traumas such as financial insecurity, housing instability, or physical illness. Suicide is also connected with insurance status, as people who are uninsured or underinsured are less likely to seek mental health care and treatment for health conditions that may contribute to mental and financial strains. However, for those who are able to access care, one study has shown that suicide prevention strategies are not a large focus of mental health provider training. Rather, strategies to treat underlying mental health conditions are emphasized, without specific attention to suicidal ideation or patient safety planning. The suicide rate can be used as a downstream indicator of access to comprehensive high-quality health care.

Suicide affects populations disproportionally based on gender, age, racial or ethnic group, and geography. Men, adults over the age of 45, American Indians and Whites, and rural residents all face higher rates of suicide than their respective demographic counterparts. The suicide rate among veterans is 1.5 times that of the non-veteran population. Veterans face unique mental health, financial, and insurance coverage challenges that contribute to the increased rate within the population. Veterans are also more likely to have access to firearms, a factor that increases the likelihood of fatal self-harm. More than half of suicides in North Carolina in 2019 were by firearm.

Elevated suicide rates are also seen in LGBTQ populations. There is no comprehensive data source for the suicide rate amongst LGBTQ persons, as sexual identity is not a component of death records. However, survey data indicate that among LGBTQ youth, the rate of suicidal ideation is 4.5 times higher than their heterosexual peers. Additionally, 40% of transgender adults report a suicide attempt. This disparity is only magnified in the young adult population, and among racial and ethnic minorities. Ostracism, family rejection, financial barriers, and health care barriers all contribute to an increased mental health burden on this population that corresponds with an increased rate of suicidal behavior.

Some studies have also shown stark disparities in suicide rates during the pandemic: in a study of Maryland residents in the first half of 2020, researchers found an overall decrease in suicides compared with the same months over the previous three years. However, when researchers looked at this data by race, they found that while suicides by white residents decreased by 45% during early March to early May, suicides by Black residents went up by 94% in the same time period.

As communities continue to address the wide-ranging impacts of the pandemic on the health and well-being of their residents, it is imperative to ensure that people have access to the mental health support and treatment they need. The levers of change and needed resources identified in Healthy North Carolina 2030 will help our state and our communities provide this support.

2030 Target and Potential for Change

The HNC 2030 work group reviewed data across several years and projected the future trend of suicide rate to develop a target. The group chose 11.1 as the number of deaths per 100,000 population by 2030. As the age-adjusted suicide rate has risen steadily over the last decade in North Carolina, and is expected to continue rising, movement toward this target would represent a meaningful reversal in this trend. 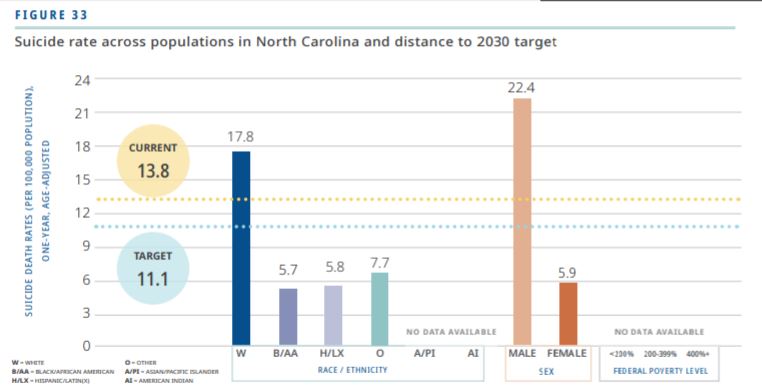